I was born in Bastos, Sao Paulo, Brazil.
On July 7, 1958, Father Shozo and his mother Masako were married.
In October of that year, while I was sailing in the Pacific Ocean from Kobe Port on the Argentina Maru, my life was in my mother’s stomach. The ship stopped at each country’s port, procured food and water, traveled south from North America to South America, and after two months of voyage, arrived at the port of Santos on the Brazilian continent in December.

After an overnight stay at a harbor hotel, Bastos City, which is 800km inland west, is the end of the long journey. He was born on August 8, 1959, the following year, by a midwife at a temple at Higashi Honganji Temple in Bastos City.
The reason why my father and mother moved to Brazil was when the younger brother Yasoyama Kinzo (Badumi Yasoyama), the younger brother of his grandfather Shosuke Yasoyama Shosuke who was an officer of Higashi Hongin Temple at Higashi Honganji Temple in Yoshizaki, Fukui Prefecture at that time. I went to Japan because I was a royal family. In 1958, parents built a temple in Bastos, a Japanese colony, and their parents passed to Bastos. My mother loved Brazil. He said he wanted to live permanently. After my younger brother, Mario, was born in 1960, my family returned to Komatsu City, Ishikawa Prefecture, where my father’s hometown was, in November 1962, because of my father’s illness.
In October of that year, second son Hiro was born.

After returning to Japan, Masako began painting oil paintings, which she had been doing since childhood.
The picture of the mother who loves nature was drawn even to the sliding doors because the Campus was not enough.
My mother was born in October 1934 in Minosato-cho, Higashi-Ibaraki-gun, Ibaraki Prefecture, as the second daughter of my father Ryo Oshima and mother Ryu. My mother’s ancestors were the servants of Taiokunodai Kunioka, a land in the Heian era, and in the Edo era, they received 500 stones. Born as the 43rd generation’s second daughter of the Oshima family.

When he was three, his parents, brother, and sister moved to Manchuria, China, and grew up looking at Russia on the banks of the Heilongjiang for seven years until he was ten years old.
When his mother was 4 years old, his mother Ryu passed away with pneumonia at the age of 38.

After that, he was a white-Russian girlfriend, and he said that he was going to see Russia on the other side of the Heilongjiang with his young mother in a carriage. In 1944, returned to Japan when his mother was 10.
The toughest mother of the brothers was adopted by a father’s sister (aunt) ‘s house in Misato-cho, Shari-gun, Hokkaido, and she met Shozo. Spent his youth until the age of 23 with Ao Ao in the wilderness of Eastern Hokkaido. The mother’s painting depicts the endless expanse of land common to China, Brazil, and Hokkaido. The love of animals and humans, drawn to blend in with nature, makes me feel as if I was feeling for my mother, who died as a child.
The mother who talked to the garden trees and wild birds in the mansion was a girl and an alien.

A lot of people gathered around the cheerful mother. My father, who is the exact opposite of his mother, only stays in the study room and remembers running a pen silently.
I’ve always liked drawing since I was little. After receiving the guidance of my mother, I began to walk as a western painter. At the age of 22, he had a head-on collision with a trailer while driving a car, and after a lifetime of nine deaths, he began his career as a painter.
At the age of 23, he lives alone in Kyoto as if he is leaving his parents’ house in Komatsu.

I wanted to try myself from scratch as a painter. Days of production while selling pictures. In the early summer of the following year, I was walking through a bamboo forest in Rakusai. Even though it is the bamboo that I always look at, whether my mind and the aspect of the bamboo at that time were exactly the same I caught my heart and kept my mind.
Moso bamboo is thick and robust, and it grows straight in the sky toward the sky.

However, the roots were heavily packed, intricately entwined with each other in the ground, and I felt the vitality like weeds in the momentum that even cracked concrete. The appearance of human beings is the trunk of bamboo, and the human spirit overlaps the rhizome of bamboo. I want to pursue the extent to which bamboo and humans can be overlapped to express themselves. From that day on, my madness began.
I worried about the color of bamboo and went to a colorless world to check the color of the bamboo of my own heart. In July 1991, I lived in a tent for a month in Greenland, an arctic country. In 1995, he holds a traveling solo exhibition with the Shanghai Museum, Sichuan Museum of Art, and Xi’an Art Academy in China, which is the home of bamboo. At that time, my heart was glued to the three bamboo paintings I met in Chengdu.

I would like to introduce the technique of ink painting, which is the origin of Japanese painting, into my oil painting.
In order to go one step further as a solo painter in Asia including Japan, studying ink painting in Japan was absolutely necessary. After a successful traveling solo exhibition in China, he decided to study abroad at the Xi’an Academy of Art and set out on March 27, 1996. On March 23 of that year, an unexpected mother was hospitalized just before departure. It was the last stage of gastric cancer. Postponed to study abroad immediately after 3 months of life and the doctor’s declaration. Every day of nursing with an auxiliary bed beside my mother’s bed. On May 19, the second month after hospitalization, my father had a traffic accident and hit my concrete on the back of my head strongly, causing a brain contusion. After wandering around the edge of death, he became a plant human.

My mother left for heaven on June 19, after being hospitalized for one month with my mother, Kim Dae University Hospital, and my father, Komatsu City Hospital. I was 61 years old. Next, I plan a traveling exhibition for my mother and daughter while taking care of my father. I wanted to realize a mother-daughter exhibition in Brazil, where my mother and I have a deep bond. On July 17, 1998, my father set out from my arms to the paradise my mother awaited. I was 67 years old. From that day on, the sky has become my parents and is always watched over.
That year, the Brazilian Mother-Daughter Tour was a huge success with gratitude to her mother.

Two years later, on April 6, 2000, she started studying in China for four years. After studying Chinese painting for a year, I returned to Japan safely on April 20 this year.
At each turning point, I met many people, bonds were created, and they continue to grow in the body like a rhizome. Like the bamboo forest, its spread creates a human society, crosses countries, holds hands, and expands the circle of friendship. The circle of friendship is the harmony of people.
I want to learn naturally, be utilized by others, and walk with gratitude to my parents 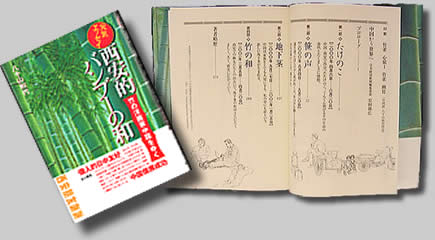